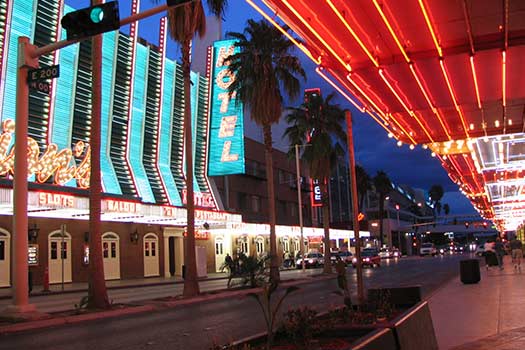 Sure, no one really comes to Vegas for a history lesson. But before you venture out on your standard Las Vegas pub crawl, head over to Fremont Street. In addition to it being the original strip, here are 10 fun facts you should know about this famous street.

1. The Street Is Covered by a Canopy

A barrel vault canopy is mounted 90 feet in the air over Fremont Street and is 1,500-feet long. It features a LED display where animations and graphics are projected overhead during the nighttime light show.

Free concerts are held on three different stages along the street where local bands and artists perform. The stages are also used for an annual New Year’s Eve party where bands play and an animated fireworks display is featured on the canopy.

3. It Features a Zipline Attraction

A SlotZilla zipline is mounted above the street where guests face their fears and fly overhead at high speeds.

4. Fremont Street Is Home to the First Hotel in Vegas

The first hotel in the city was built on Fremont Street, which opened as Hotel Nevada in 1906 and is now known as Golden Gate.

5. Its Nickname Is “Glitter Gulch”

Fremont Street earned the nickname “Glitter Gulch” due to all of the neon signs that it features on the western end of the block. Perhaps you’ve seen some of them in a number of feature films.

The location had the first gaming license in Nevada and housed 80 percent of the casino market in Las Vegas by 1992.

7. It’s the Second Most Famous Street in the City

Fremont Street is one of the most popular streets in Las Vegas, following the Strip, and continues to be a popular tourist attraction to this day.

9. The City’s First Movie Theater Is on the Street

El Portal was the first movie theater built in Las Vegas and was also the first air-conditioned building in Vegas. It now operates as a gift shop.

Vegas Vic is a famous symbol that is recognized worldwide and is mounted over the Pioneer Gift Shop.

During the day, take time to soak up some of that rich Sin City history. At night, be sure to hit the Strip in style by booking a VIP Vegas party bus for you and your crew. Turnt Up Tours offers stylish transportation to some of the hottest clubs in Vegas, and we even throw in some free booze. Call 702-843-0525 today to book with us.