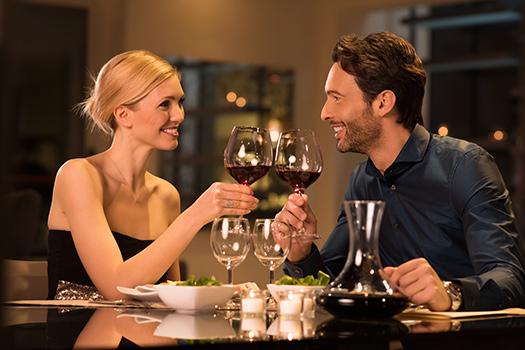 Whether you and your significant other are walking the strip or renting a party bus in Las Vegas, at some point you’re probably going to want to take a break, have a romantic meal, and focus on each other. There are many great places in Vegas for couples to dine. Here are 8 of the top choices.

The name of Top of the World is self-explanatory due to the restaurant’s location on the 106th floor of Stratosphere Tower. You can take in the panoramic views of the city while ordering filet mignon and topping it off with crème brulée that is good enough to share.

The Barrymore serves creative American fare in a luxurious setting that features walls and ceilings lined with vintage film reels. The restaurant is off the strip and offers romantic food options, including foie gras, oysters Rockefeller, and filet with béarnaise.


Transport yourself into France by booking reservations at Alizé, which is known for their world-class French cuisine with spectacular views of the city at the top of Palms Casino Resort. Chef André Rochat prepares culinary dishes that include pan-roasted Maine lobster, tea smoked duck breast, and veal wellington.


The elegance and décor inside of Lakeside are impeccable with the modern furnishings that are used. The restaurant is located at the Wynn Las Vegas hotel and features views of the hotel’s manmade lake.


The Aureole Las Vegas is known for their four-story wine tower at the Mandalay Bay. Patrons can indulge in the Ocutan Dark Chocolate and Pistachio Bar after ordering from the New American menu.


Instead of traveling to Paris, you can visit the Eiffel Tower Restaurant, which offers beautiful views of the fountains at the Bellagio hotel. The 11th-floor restaurant serves culinary delights like the braised short ribs and herb-crusted venison. Finish the meal by sharing a decadent chocolate soufflé.


Order a 7 or 12-course meal at L’Atelier De Joel Robuchon where you can try intense flavors blended to perfection. Each dish looks like a work of art with a meal that will offer plenty of entertainment due to the decadence of each plate. The interiors feature plenty of dim lighting and dramatic chandeliers overhead.


Italian food is on the menu at Sinatra inside of the Encore hotel where you can view Sinatra’s memorabilia, which includes his Academy Award.

Once you’ve had the chance to wine and dine your significant, set aside some time to party and go on a VIP club crawl. Vegas is the perfect place to party with the one you love, and Turnt Up Tours makes it easier for you to hit the best clubs. Call 702-843-0525 or book a tour online.